And now a word from our sponsor

As targeted SEO spam goes, this message, received today, ranks pretty poorly. However, it gives me an opportunity to point out that I am in fact available for consulting/analytical engagements and advisory roles. As we say down south, "Hollah at me!"

My name is Sherry, and my company Topspot-Promotions represents online sport sites in various domains. We are looking at reputable sites to offer them profitable opportunities to help promote some of my clients sites.

I've been seeing this ad on TV for the past few days, and I thought I'd share it with mega-uber value readers everywhere. In case you aren't acquainted with it, Tesco is a highly successful UK-based chain of supermarkets/superstores, with operations in many other countries. For some, the company represents a vampire squid on the face of UK retailing, and to others, a textbook example of masterful site acquisition and marketing genius (Tesco's ground-breaking loyalty card/data-mining approach can now be found in many walks of life in the UK, and is almost as prevalent as CCTV!).

Love them or hate them, they are typically very good at what they do, and one thing they have been doing for over five years now is running an MVNO in the UK. The network now has 2.3m subs, and is branching, with some success, into the contract segment from an historical pre-pay focus. So, with that background, here the company takes good-humored aim at the inflated egos on display among telcos when it comes to branding and brand extension. (This is particularly interesting/ironic as Tesco's long-standing CEO, Sir Terry Leahy, succeeded mentor Lord MacLaurin, who was chairman of Vodafone during its period of frenzied international expansion and global re-branding of local subsidiaries.)

Anyway, it's all good fun, but with a relevant and fairly obvious point which must be a source of discomfort for UK telcos. The Tesco customer regularly interacts with physical manifestations of the Tesco brand and its values: its stores, its staff, its carparks. Tesco is literally something the customer can get his teeth into, and while in the carefully-structured cocoon of its stores, Tesco can get under the skin of the customer - guiding, manipulating, gaming, and, yes, rewarding. In contrast, the telco customer experience of an operator's brand is almost an entirely abstract and barren affair, most tangibly measured in the relative indifference/ineptness of call center staff. No wonder there is an almost desperate sense of need evident in the branding/sponsorship activities of telcos.

Not for our beloved Tesco Mobile. No such self-esteem problem or delusions of grandeur in evidence here. Just rewards for customers via the "real world" brand, delivered with appreciation - a virtuous circle reinforced. Masterful. It will be a warm day in December before we see BT Group or Virgin Media rewarding customers with Christmas turkeys, though in this time of austerity, that might be just the strategy which would resonate. Members of the Dumb Pipe Taliban Gospel Choir, chime in, "Leave the retailing to the retailers."

Catching up on some long overdue blog-reading, I stumbled across David Beckemeyer's interesting post of September 25. I tried using his own redirect link, as well as bit.ly, to post a link to Facebook, but both times I was greeted with the following error message:

"This message contains blocked content that has previously been flagged as abusive or spammy."

I'm hardly surprised that Facebook considers openbook to be abusive, given that openbook is simply using a Facebook API to reveal the portion of its user base which has failed to activate security properly. Then again, given some of the fantastically low I.Q.'s on display (type in the drug reference, racist hate speech, or sexual buzzword of your choice, and watch the st00pid flow), one could also argue that this group of users constitutes a special needs group who should be given assistance (preferably in txt spch, innit) to tweak their settings.

No matter how you slice it, it ain't pretty, and I am most disturbed, though not surprised, to see that Facebook seems to probe and index even shortened URLs embedded in status posts before they are even posted. I'm sure Mr. Z would argue that he's trying to protect us from ourselves, and while I'm pretty good at that on my own, it seems clear that many FB users are incapable of, or uninterested in, really protecting themselves. I assume law enforcement, potential employers, and the intelligence services of a number of less-enlightened countries take a keen interest in the effluent revealed here. The next test comes in a moment, when, after I publish here, I attempt to post this link to my own FB page. Let's see how far the probing extends...

UPDATE: I was able to post a link to this to my wall, so it would seem that there is no sophisticated indexing of the target page going on here, given that the post contains two separate links to openbook. Still, I'm curious to see how the situation evolves over time. I'm probably being paranoid, but, as the old adage states, "Just because you're paranoid, it doesn't mean that Facebook is not out to get you."
Posted by James Enck at 11:39 AM No comments:

Here's one for folk who can't do maths

Where on earth would you store them all? 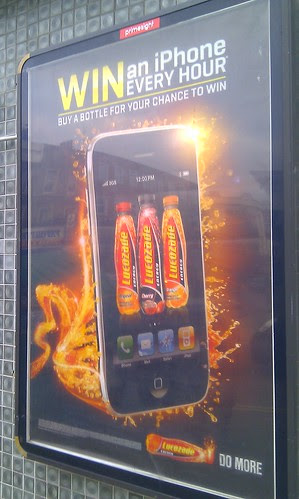 Just a moment ago I tried to view the NetRoadshow presentation in support of ONO's senior secured bond issue using Chrome, my browser of choice, and received this message:

In order to view NetRoadshow presentations, you must use one of the following browser versions on a Windows operating system:

Please try logging in again with one of the browsers listed above. If you are in a corporate environment and don't have one of these browsers, please contact your IT support staff for assistance.

There's a cluetrain leaving in 15 minutes, guys, and you ought to get on it...
Posted by James Enck at 1:51 PM No comments:

You may have seen this on Lindsey Annison's fine blog, but I like the simplicity of this video by rural fiber pioneer Chris Doyle.

What does your smartphone say behind your back?

I stumbled across this interesting link in the NANOG list traffic, and thought I would share it. The folks behind the pcapr project have developed a tool to analyze which smartphone apps are saying what to whom. The instructions here are not for those of low geek quotient, and sadly it's a Mac-only tool at present, but I expect we might see some interesting analysis coming out of this if enough people take part and share their results.
Posted by James Enck at 9:51 AM No comments:

I'll skip my normal apology for not posting recently, but you might want to consult this site for some very fine examples from others. No doubt somewhere therein lie elements true to my own recent experience, though I can confirm that I have definitely not been working on a Queen musical.

So, to return to EuroTelcoblog topics of interest, a friend on the Fiberevolution list points to this blockbuster news out of The Netherlands. Essentially, two large public pension funds in the country are combining to launch a new EUR1bn fund with the purpose of consolidating and expanding existing fiber/FTTH networks over the next ten years, in a project that may ultimately end up as a EUR10bn ticket. The new fund, Communications Infrastructure Fund (CIF), will also invest in wireless towers, which is entirely sensible given that the fiber network will provide the most robust backhaul available in the country.

I've been wondering for some time when we might see this kind of fund emerge, so it is a welcome development, and should put some genuine financial firepower behind the development of open access networks, at least in countries where the financial resources still exist to fund them. In my view, this structure better aligns the financial return profiles of the investors with the durations of the projects. Pension funds by definition have to plan for stable returns over the next 50 years; telcos and MSOs are enslaved to the 3 - 5 year time horizons demanded by shareholders, often coinciding roughly with the lifespan of management teams...
Posted by James Enck at 11:03 AM No comments: