No peace in the valley

My last remaining grandparent died last week, and I spent the week in the States for the funeral, entirely offline. So I know there was a lot I missed (my bet is on Deutsche Telekom), much of which is past its shelf-life for commentary. However, in catching up with my emails, the following items have caught my eye, FWIW:

Posted by James Enck at 7:16 AM No comments: 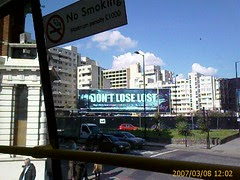 Sky ad 03 07
Originally uploaded by jimiinc.
I know I haven't posted anything in some time. I've had a lot of loose ends to tie up and have been otherwise distracted, so apologies. On the bus to a meeting today I passed a lot of very prominent Sky advertising like this, which highlights that Virgin Media customers in the UK are to lose content like "Lost" and "24" due to the public bust-up between Virgin and Sky. One other billboard I saw pulled no punches: "Get Jack Back," it screamed, followed by a succinct explanation about Virgin's apparent decision to drop Sky content and ending with the message "To subscribe to Sky, call..." What amazes me about all of this is the sheer speed with which Sky has been able to move. What was a public spat a week ago has been turned into a national ad campaign virtually overnight. At lunch today someone reminded me that this is exactly the sort of advertising at which Richard Branson excelled ten years ago during his bitter war with British Airways.
Posted by James Enck at 11:20 PM No comments:

This is a test. Apparently some people are experiencing problems with Blogger.
Posted by James Enck at 12:19 PM No comments: